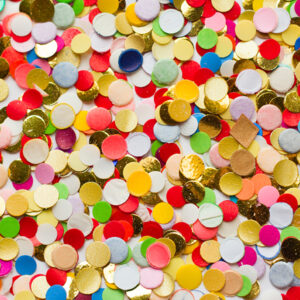 Microplastics are any plastic pieces less than five millimeters in length. These tiny plastic pieces can be easily be washed away by rain and end up in rivers and oceans where they pose a threat to wildlife. Avoid plastic confetti and other microplastics whenever possible.

Help prevent litter by using confetti inside only. Sweep or vacuum the area confetti was used in carefully so that none of it works its way outside and becomes litter.

Undyed Paper Confetti Can Be Composted

If you compost at home, you can add paper confetti to your compost pile. Avoid composting confetti made from dyed or glossy paper because it may contain toxic heavy metals.

Toss Confetti in the Trash

Make sure confetti ends up in the trash. Whether made of paper, plastic or metallic foil, it’s too small to recycle.

Paper confetti is biodegradable, which makes it a more eco-friendly choice than plastic confetti. Check out this video on how to DIY leaf confetti.

Dried flower petals and buds are natural and biodegradable, so they are an eco-friendly alternative to plastic or metallic confetti.

Make Your Own Confetti From Scrap Paper

Skip the store-bought confetti and make your own from scrap paper, shredded paper or used tissue paper you have lying around. You can use scissors or a hole puncher to make different shapes.

Many Wedding Venues Have Banned Confetti

So many couples love wedding photos featuring a confetti-in-the-air moment, but venues have gotten tired of cleaning up the tiny, pesky pieces of trash. However, some of these venues will still allow dried flower petals to be used instead.

Rice confetti is an old standby for wedding days, and you may think of it as a harmless, eco-friendly choice. However, it’s now commonly avoided because it may be hazardous to birds, who can choke on it. It also tends to be slippery on walkways, so it’s best avoided for your guests’ safety.