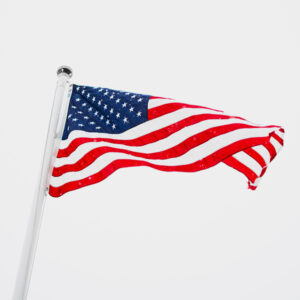 Take to a Flag Disposal Box

Many Veterans of Foreign Wars (VFW) posts and state and county government offices have official flag disposal boxes outside of their buildings. You can drop off any old or unwanted U.S. flags for respectful disposal.

Take to an American Legion

Most American Legions, VFWs and Boy Scout Troops will accept old flags and retire them respectfully in their next flag disposal ceremony.

Drop Off at a Police Station

Retiring Flags at Your Home

A safe method to retire a flag at home is to bury it respectfully in a ceremony. Other respectful methods that can be done at home can be found here.

Bring to a Textile Recycler

Most flags are made from cloth that can be taken to a textile recycler to be recycled with other worn out clothing and textiles. Some major clothing recyclers include Goodwill, The Salvation Army, Society of St. Vincent de Paul, Savers and American Textile Recycling Service.

Donate to a Cemetery or Funeral Home

Flags that are still in usable condition can be donated to a national cemetery or funeral home.

Donate to Stars for Our Troops

Mail unwanted 3’ x 5’ flags with embroidered stars to Stars for Our Troops. They cut out the stars and mail them to active military, veterans and first responders as a show of support and respect.

The Oldest and Newest Flags of the World

Denmark holds the record for the oldest continuously-used flag in the world, with its white Scandinavian cross on a red background dating back to 1625. The title of the newest flag in the world goes to Mauritania, a country in Africa, who changed its flag to include two red stripes in 2017.