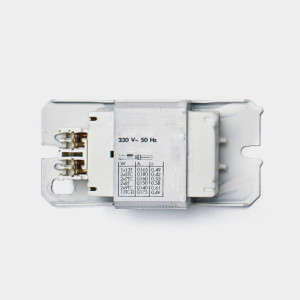 Never Throw in the Garbage

Fluorescent ballasts may contain toxic substances including mercury, DEHP and polychlorinated biphenals (PCBs), so they need to be disposed of as hazardous waste. Otherwise, these chemicals will leach into the water and soil.

If your ballast was made before 1979, it likely contains polychlorinated biphenyls (PCBs), a highly toxic substance, and it is likely to rupture at any time. Even if it hasn’t ruptured yet, it may be slowly leaking PCBs. The EPA recommends you replace it immediately.

Still Hazardous Even if PCB-Free

In 1978 the EPA banned using PCBs in fluorescent ballasts. Newer ballasts are PCB-free and can be identified by a label that says “No PCB.” Manufacturers still use a known endocrine disruptor called DEHP, which is shown to cause liver, kidney, lung and reproductive issues.