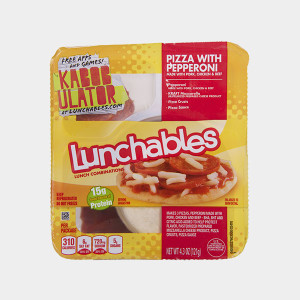 The outer cardboard packaging that Lunchables comes in can be recycled as long as it’s clean. The inner plastic tray and film go in the garbage.

Make Your Own “Lunchables”

Making your own “Lunchables” lunch box in reusable containers has three major benefits: it’s better for the environment, it’s healthier and it’s more affordable, as shown by the Squawkfox homemade Lunchables experiment.

Bad for the Environment and for Your Health

The health benefits of Lunchables can be nonexistent, depending on which type you buy. The company has been delivered notoriously poor nutrition ratings:

“Most Lunchables and other packaged lunch meals are packed with saturated fat and cholesterol. The only way to get significant fiber from these products would be to eat the box.”  -Cancer Project dietitian Krista Haynes, R.D., L.D.

Lunchables Is a Billion Dollar Product

Kraft Heinz, the parent company of Oscar Mayer, sold $1.36 billion of Lunchables in 2017. Its sales increased a whopping 19 percent since 2014. Over 30 years old now, this billion dollar product was first created as a way to repopularize bologna, which began losing popularity in the mid-1980s.