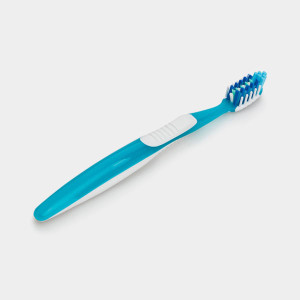 Because of their batteries, electric toothbrushes must be disposed of as e-waste.

Colgate has partnered with TerraCycle to create the Colgate® Wisp® Recycling Program, a completely free recycling and fundraising program that accepts 16 Colgate Wisp mini-brushes at a time. Find out more here.

This program recycles toothbrushes as well as toothpaste tubes and caps, floss containers, mouthwash bottles and caps, deodorant containers and caps, and soap packaging. Bring empty, dry materials to a drop-off location or mail in to TerraCycle. Learn more.

Buy Preserve brand toothbrushes and take advantage of the Preserve Toothbrush Takeback recycling program. For every six Preserve toothbrushes that you send back to the company for recycling, you’ll receive a $6 coupon to shop at Preserve’s online store. Find out more here.

Brush with Bamboo toothbrushes have completely biodegradable handles, BPA-free bristles, come in compostable packaging, and are designed to last just as long as a conventional plastic toothbrush.

An old toothbrush makes a great tool for cleaning a baseboard and getting out the lint and other dirt the vacuum just can’t reach.

Getting the Mud Out

Old toothbrushes are great for getting the mud out of dirty shoes, bikes and whatever else you take outside.

An old toothbrush can be extremely useful for cleaning delicate pieces of jewelry.

Clean the Toothbrush Before Reusing It

To clean an old toothbrush, soak it for a few hours in a 50/50 solution of white vinegar and water. Then give it one final rinse and let it air dry.

The House That 20,000 Toothbrushes Built

When students at the University of Brighton built a house almost entirely of waste, the materials used to insulate the walls included 20,000 old toothbrushes, as well as DVD cases, VHS tapes and old demin. Find out more about the Waste House.

Before the Modern Toothbrush

The modern toothbrush wasn’t invented until 1938, but that does’t mean people never brushed their teeth. Ancient civilizations rubbed a “chew stick,” a twig with a frayed end, against their teeth to clean them. The bristle toothbrush was invented in 1498 by the Chinese, but the bristles were actually hog hairs, and the handle was made of bone or bamboo. Horsehairs were used in the 20th century until 1938, when DuPont introduced nylon, still in use today.